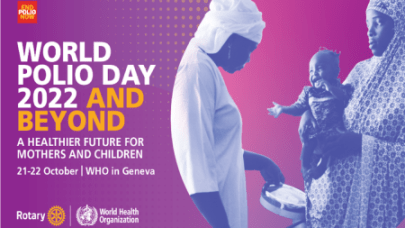 Once again, Rotary’s members and supporters united to show tremendous support in the fight against polio. You can listen to an “Outsmarting Polio” podcast, which includes a discussion with Carol Pandak, Rotary’s director of PolioPlus, Ananda Bandyopadhyay, deputy director of the polio team at the Bill & Melinda Gates Foundation, and Jason Keyser, managing editor of Rotary magazine. They discuss variant outbreaks, the new hope provided by nOPV2, and provide an update on Rotary’s latest efforts to fight the disease. https://open.spotify.com/episode/3aMU0rlExFa5ybtioUQ9y2